The Papio-Missouri River Natural Resources District (NRD), covering Burt, Dakota, Douglas, Sarpy, Thurston, and Washington Counties, has received approval for their updated Multi-Jurisdictional Hazard Mitigation Plan (HMP) for 2021 from the Nebraska Emergency Management Agency (NEMA) and the Federal Emergency Management Agency (FEMA). This plan is required to be updated and approved by FEMA every five years, with the last version approved in May 2021. All communities are eligible and encouraged to participate in the planning process.

What is a Hazard Mitigation Plan?

An HMP is a community-guided document that assesses vulnerability to natural and human-caused hazards and identifies mitigation projects to reduce or eliminate such risks. An approved HMP is a FEMA requirement for jurisdictions to become eligible for several grant funding options. This approval enables your community to be stronger and more resilient by reducing your community’s risk and impacts from disasters, as well as building partnerships and relationships with stakeholders within your community and region.

Why You Should Get Involved

In order to be successful, we need your participation and input on this community-driven HMP. Here are just a few of the reasons why public participation is important during the HMP planning process:

According to a 2017 report by the National Institute of Building Sciences (NIBS), implementing hazard mitigation tactics and exceeding building codes together would prevent 600 deaths, 1 million nonfatal injuries, and 4,000 cases of post-traumatic stress disorder in the long term. Community-driven HMPs are proven in saving lives during disasters, which is why it’s imperative communities are involved in the planning process. 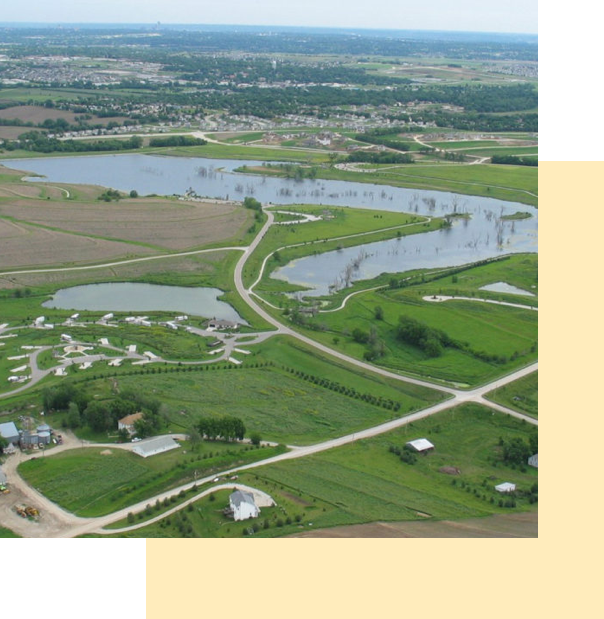 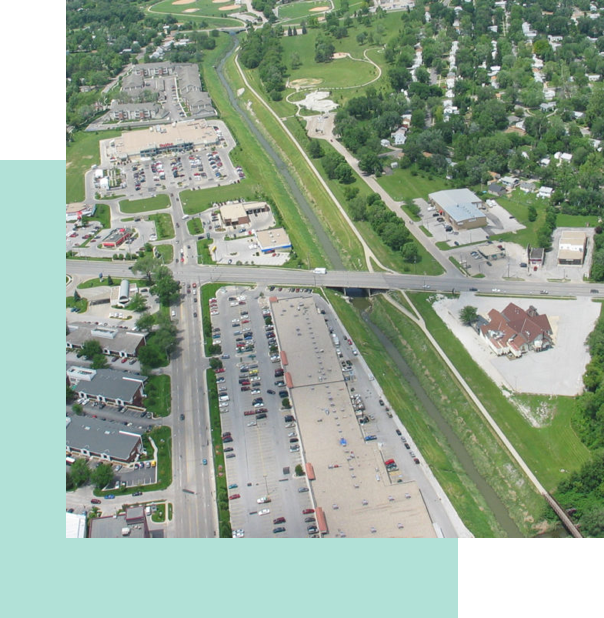 Based on the same 2017 NIBS report, every $1 spent on hazard mitigation saves $6 on future disaster costs nationally. And as previously mentioned, FEMA-approved HMPs are needed to gain eligibility for federal mitigation grant programs. By planning and preparing for hazards in advance, communities can help increase recovery speed while also decreasing recovery costs.

Public participation during the HMP process helps determine, evaluate and prioritize local community hazards and vulnerabilities. Through the planning process, local entities can build partnerships to address these risks, create risk reduction tactics, and align these strategies with other community objectives. Knowledge is power – and the more a community knows together, the more prepared and resilient they can be before, during, and after a disaster. 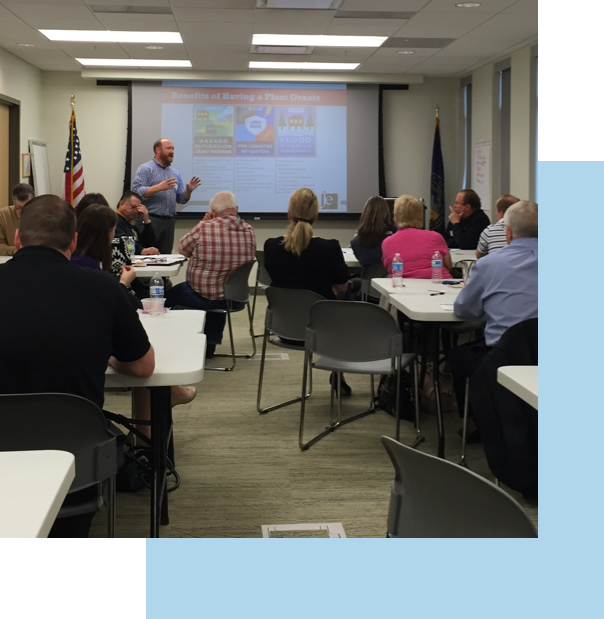 The Papio-Missouri River NRD planning process included public meetings to allow interested stakeholders and community members to learn more about the plan and provide input on community vulnerabilities and actions to address such concerns.

The regional planning team kicked off the project with a meeting to discuss the planning process, goals and objectives, and project schedule.

Round One Public Meetings

The first public meeting round was used to create a district risk assessment. This assessment identified top risks posed to the district and informed the strategies developed later in the planning process.

The second round of public meetings was designed to develop mitigation strategies based on the risk data collected in earlier project phases.

The draft hazard mitigation plan was published for a public review period. Feedback generated was used to finalize the plan.

Throughout 2020, the Papio-Missouri River NRD and JEO Consulting Group hosted risk assessment and mitigation strategy meetings to gather input from community members, stakeholders and local officials about the HMP and provide feedback on specific concerns and actions to pursue. Additionally, more than 650 responses were collected from residents within the planning area, representing 20 communities, during the successful Would You Rather? social media campaign. 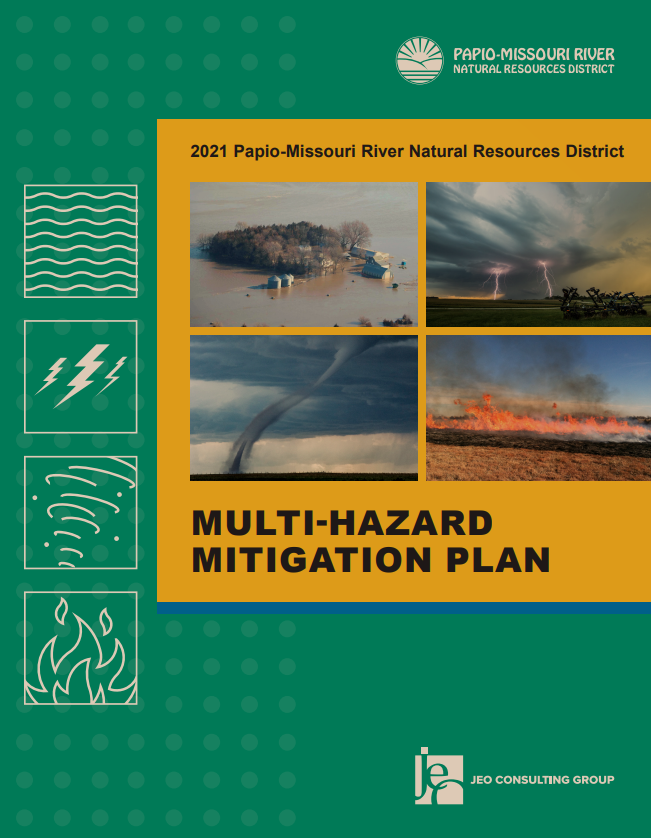 During the summer of 2020, we asked residents in the Papio-Missouri River NRD Would You Rather? when it comes to different hazards that face our communities every day. As part of this conversation, residents completed a short survey to help identify local hazards, which would then help the NRD and JEO Consulting Group update the 2021 Hazard Mitigation Plan (HMP). More than 650 responses were collected across 20 communities within the planning area, helping to identify community hazards that impact residents the most and allowing the project team to work towards reducing the impact of those hazards. Learn more about past major events and mitigation projects for your county below. 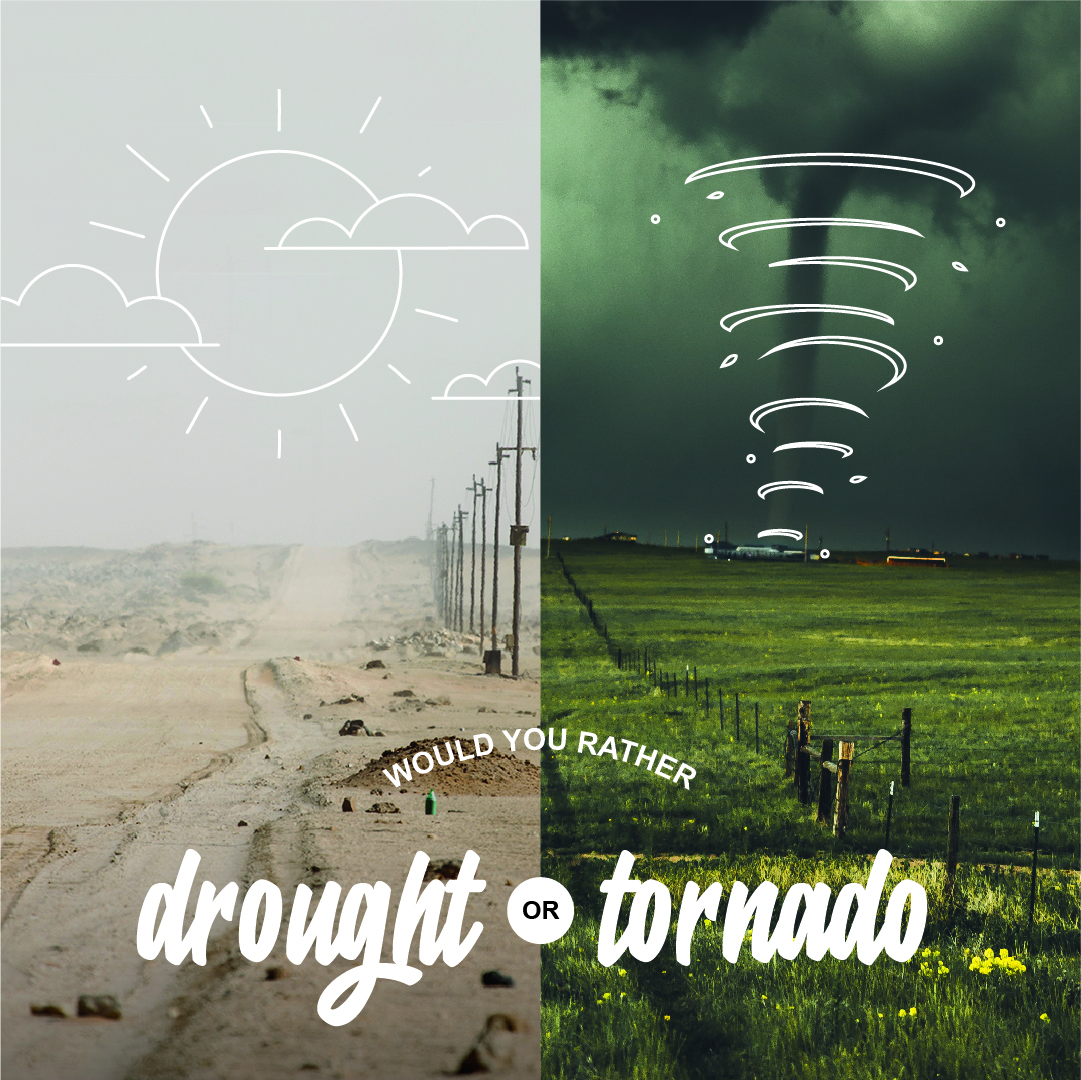 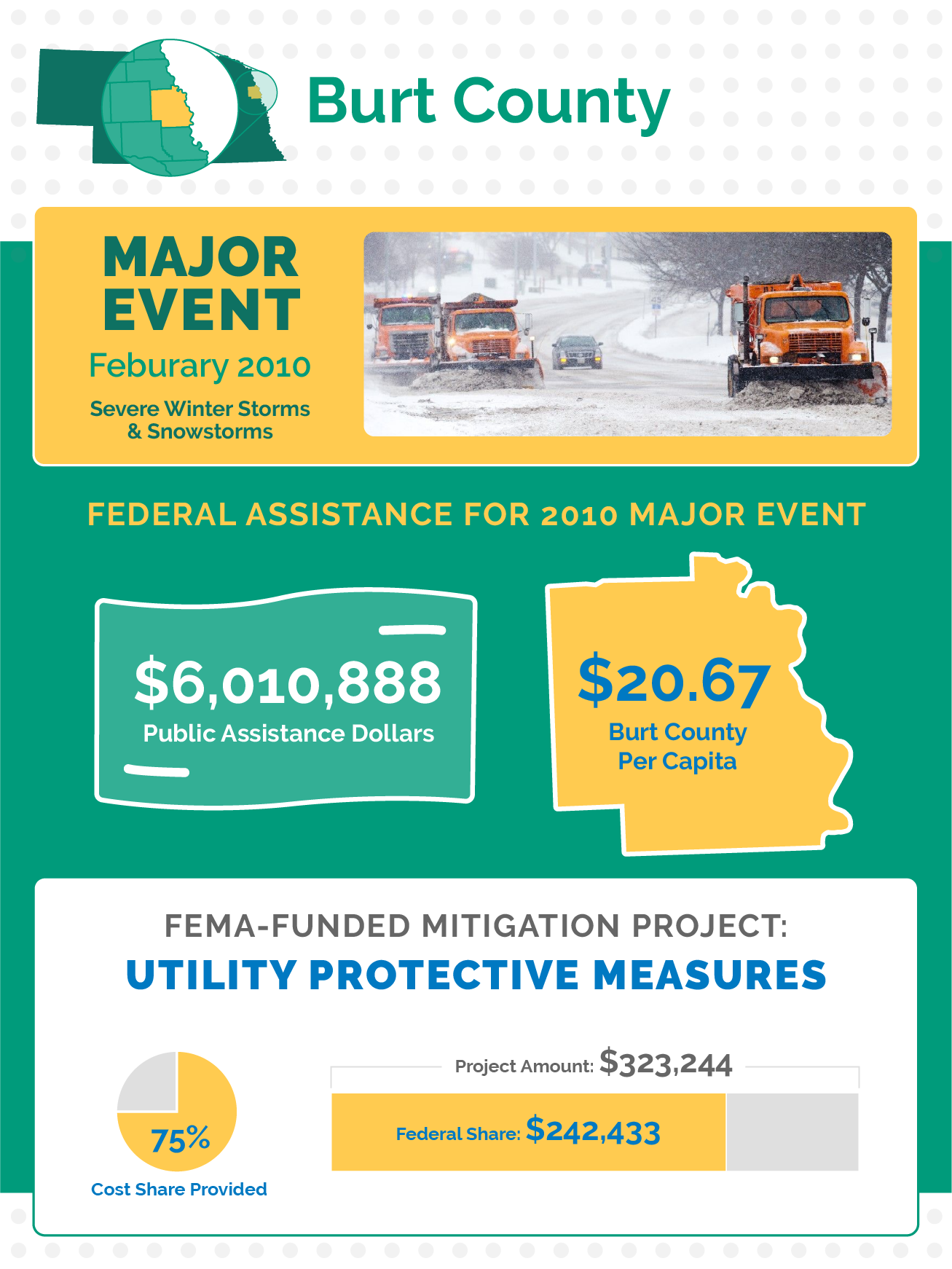 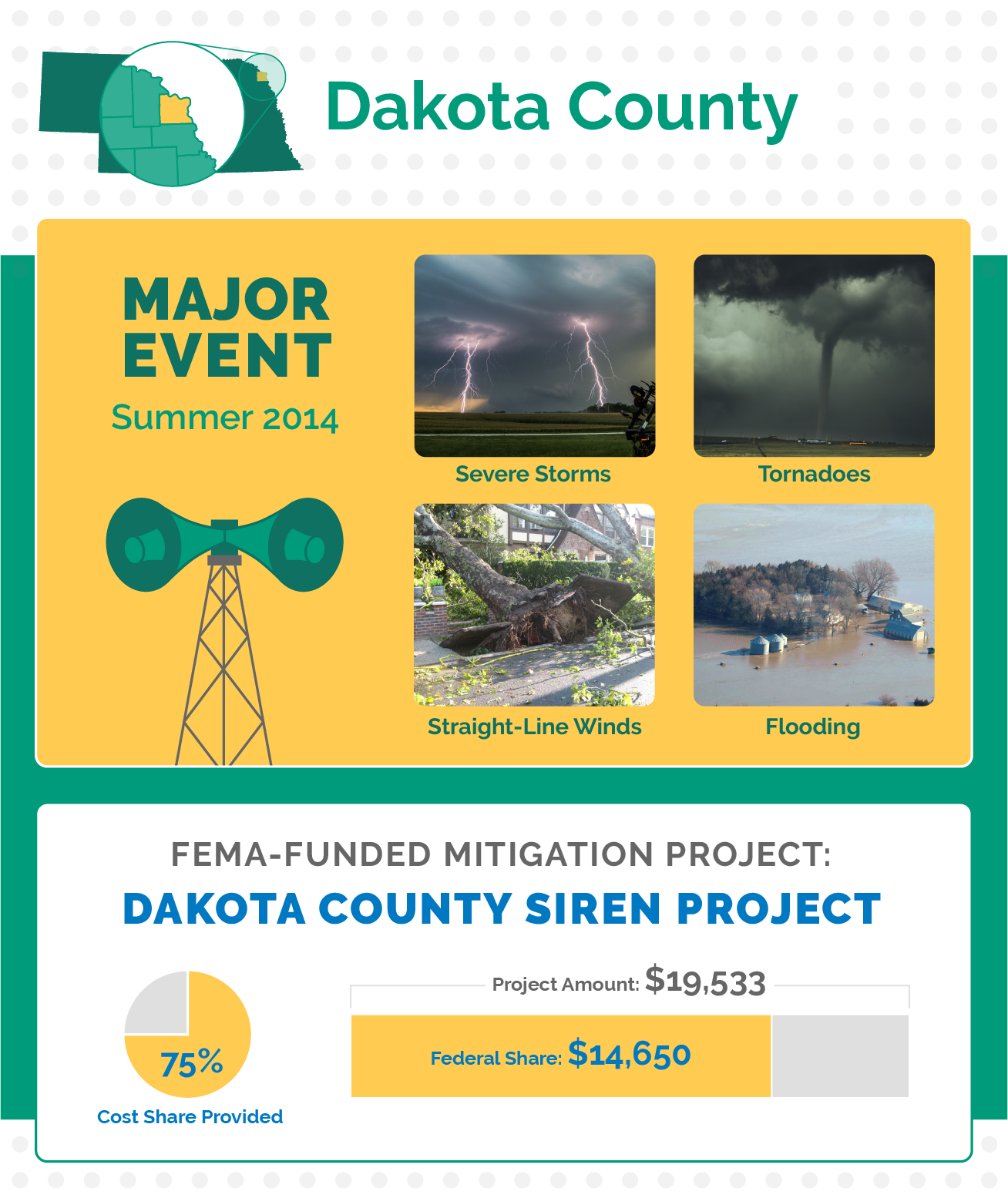 FEMA-Funded Mitigation Project: Warning Systems – Dakota County Siren Project
Dakota county was one of 13 counties impacted by flooding from May to August 2011, including many within the Papio-Missiouri River NRD region. Due to the major disaster declaration signed in August 2011, Dakota County received funding to perform and evaluate existing alert sirens to help determine which ones should be replaced or upgraded. This mitigation tactic helps to improve safety of all Dakota County residents by preparing them in advance of incoming storms. 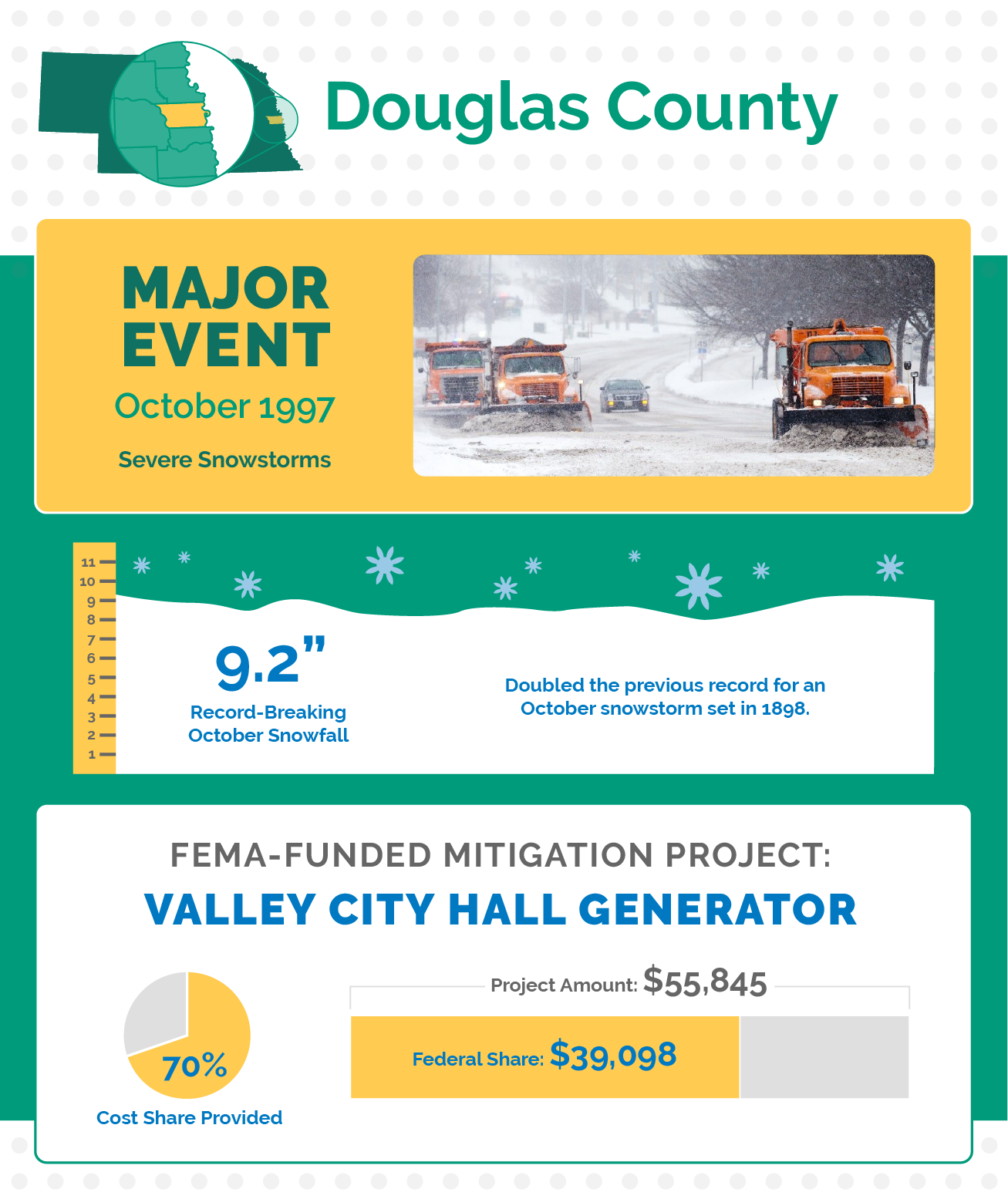 Past Major Event: Severe Snowstorms, October 1997
Severe snowstorms in October 1997 caused then-President Clinton to declare 39 counties, including Douglas, a major disaster and led to federal public assistance dollars to help support rebuilding and mitigation efforts. Omaha, for example, recorded 9.2-inches of snowfall, which doubled the previous record for an October snowstorm from 1898.

FEMA-Funded Mitigation Project: Generators – Valley City Hall Generator Project
The City of Valley was part of many jurisdictions impacted by the February 2010 severe winter and snowstorms. A major disaster declaration was signed, allowing federal public assistance to be provided to 57 counties, including Douglas. This funding allowed Valley City Hall to secure a back-up generator in 2012 with HMGP and city funds; a portable generator is available for lift stations, and the city continues to apply for funds for additional generators. 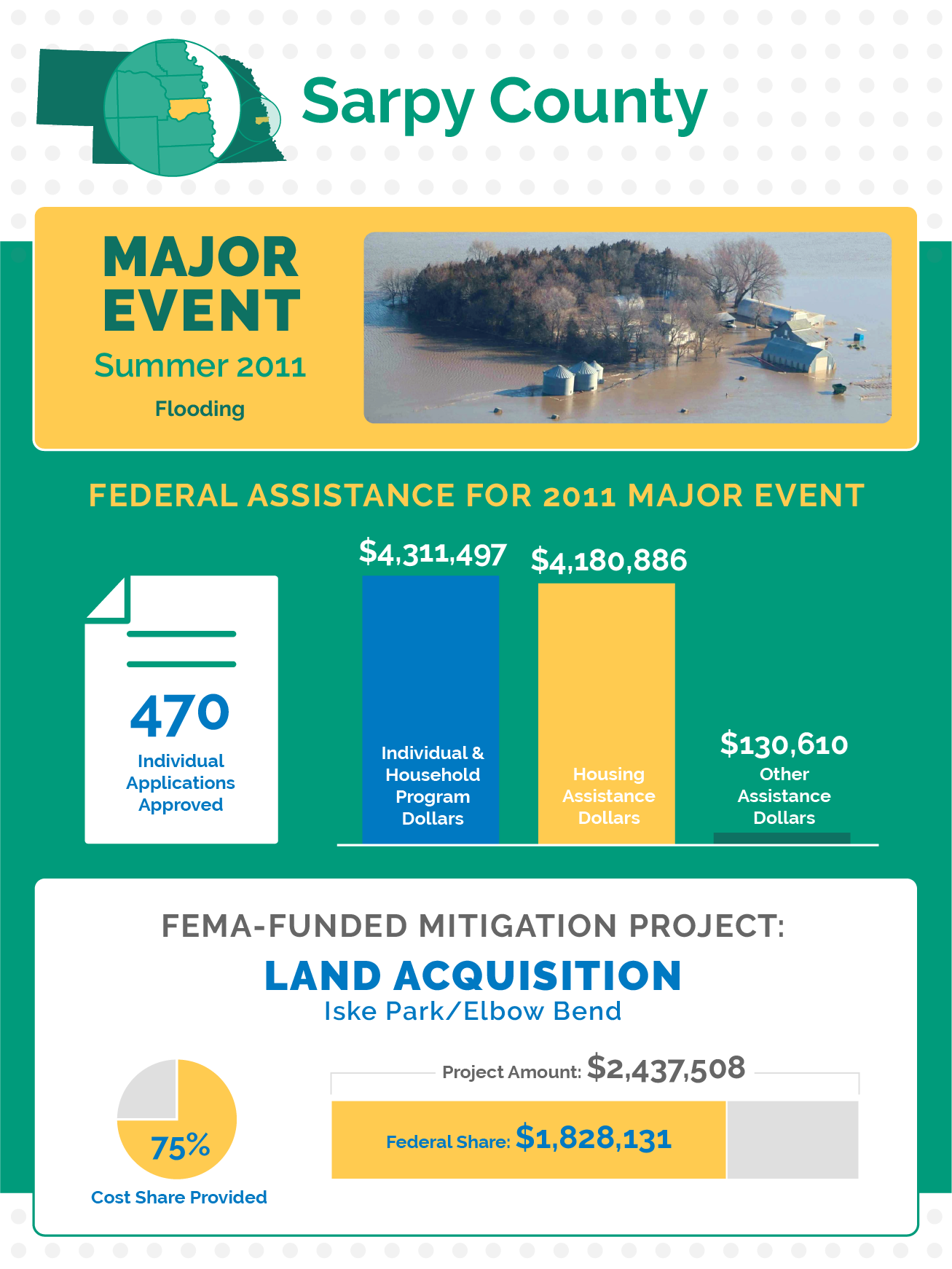 Past Major Event: Flooding, Summer 2011
Thirteen counties, including Sarpy, were impacted by flood waters from May to August 2011. A federal major disaster declaration was made that August by then-President Obama. Due to the extent of the flooding in Sarpy County, residents were able to apply for individual assistance with the Federal Emergency Management Agency (FEMA), in addition to the county receiving public assistance funds as part of the disaster declaration.

FEMA-Funded Mitigation Project: Land Acquisition – Iske Park/Elbow Bend
Approximately 30 houses within Iske Park community along the Missouri River were damaged beyond repair during the 2011 floods, barring the owners from rebuilding along the floodplain. By buying out these properties, the Papio-Missouri River NRD can prevent future property damage and possibly save lives in future major flooding events along the river. 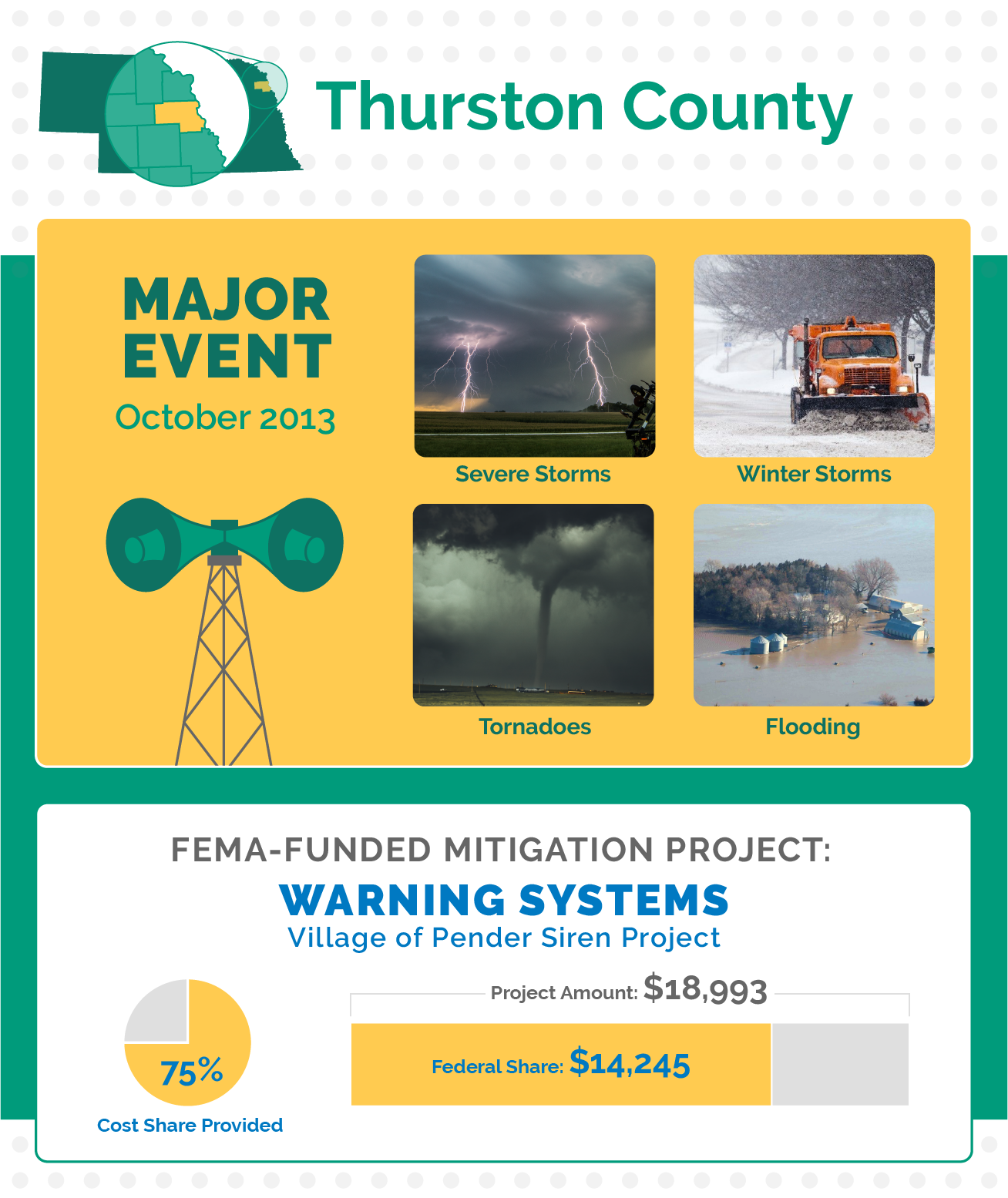 FEMA-Funded Mitigation Project: Warning Systems – Village of Pender Siren Project
As part of the 2011 flooding major disaster funding, the Village of Pender was able to add a new weather warning siren within city limits. This mitigation project will help to improve the safety of its citizens during future events. 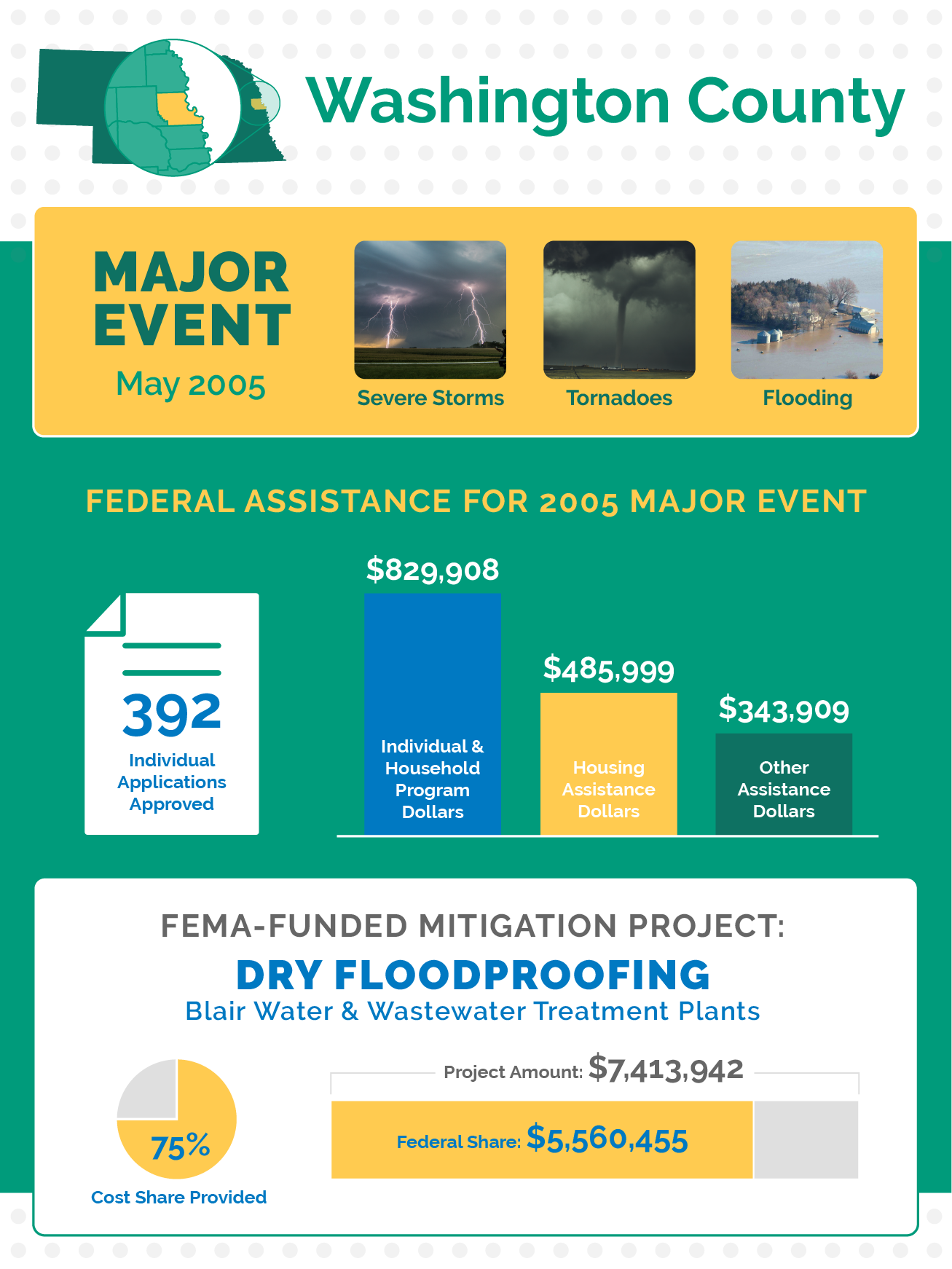 Past Major Event: Severe Storms, Tornadoes, Flooding, May 2005
The southeastern portion of Nebraska was ravaged by severe storms, tornados and flooding in May 2005, with 27 counties included in the major disaster declaration signed by then-President Bush. Not only were impacted counties, like Washington, provided federal assistance, but also individuals and householders whose properties were significantly damaged during these events.

FEMA-Funded Mitigation Project: Dry Floodproofing – Blair Water & Wastewater Treatment Plants
In May 2011, the US Army Corp of Engineers warned those along the Missouri River south of Gavins Point Dam of flooding due to higher than usual dam release – 160,000 cubic feet of water per second versus the typical 16,000-19,000 cubic feet of water per second. This release, caused by the excessive snow pack and extreme rain fall, led the City of Blair to instal temporary flood control berms to protect the local water and wastewater treatment plant. Permanent flood control measures were construction from 2014 to 2016 included installing flood control berms, utility relocation, a new pump station and flood gate, and purchasing backup generators. Fairview Drive – the city’s only access to the plants – also had to be reconstructed with 1/3 of the roadway elevated above the 500-year high river elevation, ensuring access to the plants during any future flooding events.

Check out these resources to learn more about hazard mitigation planning in your area.